YOUR GATEWAY TO EUROPE AND ABROAD NEW SINCE MAY 2017: 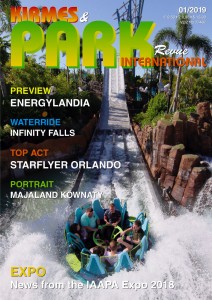 The English edition of the Kirmes & Park Revue that appeared regularly since 2003 is no longer only a 1:1 copy of the earlier German version, but an independent magazine.

The main focus of the Kirmes & Park Revue International is theme parks and water parks. This is already visually apparent in the new title page design and the extended park section, whereas the fairground section has been shortened dramatically, and geared towards international interest only.

The Kirmes & Park Revue International now appears with an appreciably higher circulation, and among others is also established at international newsagents and magazine retailers. Additionally, the most important decision makers in the branch receive a free subscription.

We are proud to continue our worldwide esteemed and independent reporting, so that you can be assured of receiving serious articles and assessments first hand, also in the future, twelve months of the year.

We look forward to a continued and shared future, and wish you a sustained, eventful, and successful 2018 season.